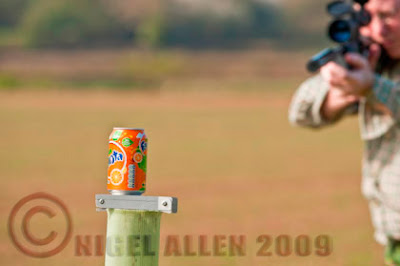 I'm pretty serious about my airgunning - I make my living from it, after all. But I've never forgotten the fun-side of it which, for me, is the very heart of my love for the sport. So every now and then I forget the serious stuff and just do what millions of airgunners the world over also like doing. Fire a 'what if...' shot.
What if... I didn't drink that can of fizzy pop but instead, shook it up, placed on that post over there and took a shot at it? Just what if... 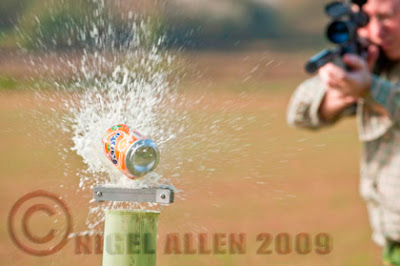 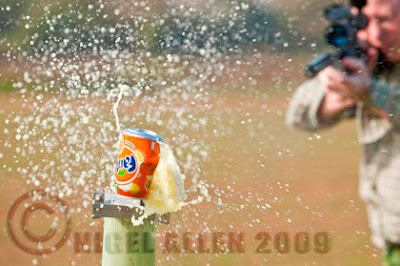 Wa-hey! Absolutely no scientific use whatsoever - but one of the most exhilarating shots I've taken for yonks!!!
Posted by NIGEL ALLEN's Official Airgun Blog at 19:56 1 comment: 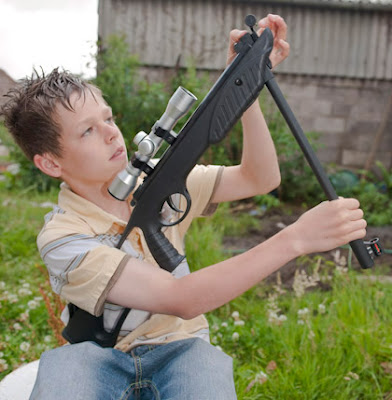 It's over a month since, but my efforts to introduce non-shooters to the sport of airgunning as part of May's National Shooting Week have, actually, paid off! Last week, my teenage son asked "Dad, can I go shooting at the weekend?"

So, under complete and constant shooting supervision - besides not being 14 yet and therefore not legally allowed to shoot unsupervised, this was also his first outing with an airgun - he enjoyed a 'by choice' plinking session at the farm. Okay, it didn't last much more than 40 mins before he wanted to do 'something else', but the seed may well have been sown. We've even gone since - again at his request - and I suspect there will be many more outings ahead.

Even if he's not as keen as I was in my teenage years, the likelihood of him 'returning' to airgunning when he's in his twenties or thirties is now much higher - and, albeit in a small way, this is another positive step in securing the future of our sport. It's so important that today's airgunning 'Dads' encourage their kids to follow suit and at least 'try' shooting. It ain't easy competing with the PS3, but as my son said: "This is actually a lot better than shooting stuff on Call of Duty." 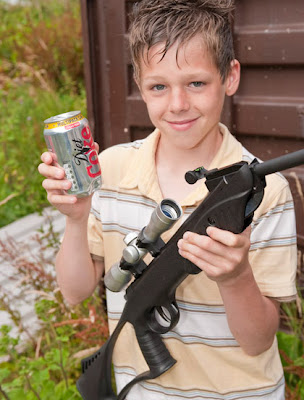 We did some target stuff, but he got most enjoyment from spinning tinnies. So did I - but I got the most pleasure just from teaching him the rudiments of safe shooting and watching his reaction at each well-delivered strike. (He was actually much better than I was when I first started shooting.)

And the gun? Well, a truly fanstastic 'starter' model from Sportsmarketing - their all-new SYNTARG, price £99.95.

It comes with a synthetic stock that's rugged enough to withstand any teenager's rough 'n' tough handling. It's been skeletonised to keep weight down, and the 'shark fin' butt really looks the business - no matter what age eyes you're seeing it through!

Its break-barrel action is mid-powered and easy enough to break open and cock - and the trigger, though non-adjustable, breaks consistently. It's not too light to be dangerous in the hands of a novice, but not so stiff as to be a hindrance. The gun's dimensions are perfect for a teenager, and though the finger reach to the trigger appears to be a bit long, it's fine once the blade has been pulled into its pre-slip position.

Along with an auto-safety, it comes with fully-adjustable open sights that incorporate fibre-optic elements to make aiming fun as well as easy. There are two green dots on the rear leaf which you line up either side of the red, foresight 'bead'. 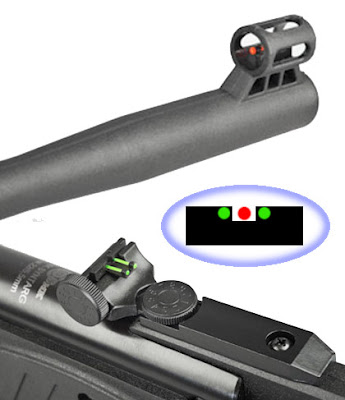 The SYNTARG's receiver has also been grooved to take a telly - and I put on one of SMK's 4 x 28 models (£24.95, incl. mounts) which kept the weight down. Four-times mag is perfect for a rookie shooter and this scope has the added advantage of a longer-than-average eye-relief. There will be no cut eyebrows with this optic!

What's more, the receiver has an arrestor plate fitted. If you bolt the rear mount tight up against this, the scope won't creep. Guns that lose zero quickly are the perfect recipe for making a newbie shooter lose interest, so this is a real bonus feature on the SMK. 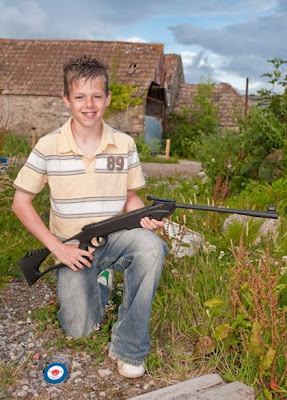 Sub-12 ft/lbs or FAC? What power for hunting? 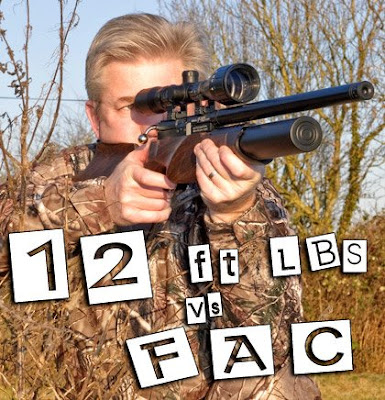 I guess playing round with a shotgun has made me come to appreciate the worth of the airgun as an effective tool for pest control - not that I ever doubted it. If you've read my previous post, you'll see that I've been dabbling (for the first time) with a 12-bore. Ironically, it was the thought that I could get bigger bags and impress the farmers that made me want to take up this different shooting sport - though there's zero chance that I'll be giving up on the airguns.
Now, in my 15 years as editor of Air Gunner, I had countless conversations with readers who were keen on going to FAC-power in the belief that it would increase their range and improve their bags. Personally, I tried it and couldn't see the benefits - sub-12 ft/lbs was plenty enough for me to hunt successfully. But I wonder how many airgunners aren't happy with the 12 ft/lbs limit they've got?
Which leads me nicely to something my good friend Ian Barnett (pictured below) communicated to me via email recently. Long-time airgun hunter, Ian began his publishing career with me at Air Gunner, where he's still a highly respected member of the writing team. (He's got a book he hopes to publish soon - a collection of anecdotal hunting trips which touch not just on the shooting, but also the whole country angle, like tracks, trails, sounds, animal behaviour etc. As the editor who launched his shooting journalism career, I'm hoping I get one of the first, signed copies. It'll be a best-seller, I've no doubt, for Ian's one of the most knowledgable countrymen I've ever had the privilege of learning from.) 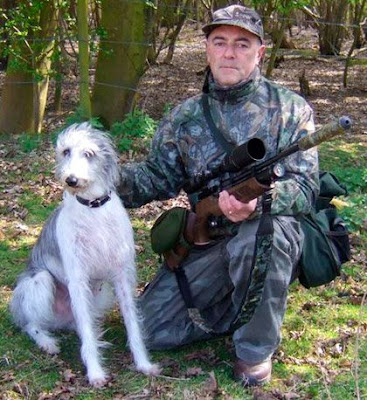 Anyway, a while back, Ian decided to give FAC-rated airgun hunting a go, and invested in a high-power Weihrauch HW100 Sporter (a sub-12 'KT' version of which he already had). With Ian's permission, I re-print here the basis of his aforementioned email:
"Nige, I've shelved the FAC gun after a year of experimenting. This won't come as a surprise to you. Looking back, I've shot an average of twice as much quarry per outing with the sub-12 compared with the FAC rifle. I'm fed up with random accuracy and low air economy. I'm back on the sub-12 HW100K, confining range to 40 yards max. The Daystate Rangemaster pellets are proving excellent within these parameters and the first-time kill ratio has improved.
I'm not intending to sell the FAC gun and will retain it for the odd longer-distance "special" request, though I doubt it will leave the cabinet much."

So there you go. The personal verdict from one of the best-known airgun hunters in the country. FAC isn't the be-all and end-all when it comes to airgun hunting. Remember that, next time you might begin to doubt the effectiveness of your sub-12 ft/lb air rifle.
(I know I will.)
Posted by NIGEL ALLEN's Official Airgun Blog at 17:27 13 comments: 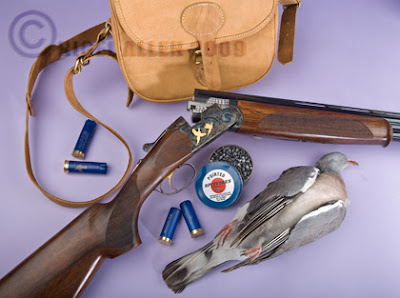 Well - how time flies! One or two followers have prompted me about not posting anything recently... and firstly I must apologise for the lack of recent entries. My excuse? Well, I've been busy working... and busy playing around with a 12-bore O/U shotgun!
As a long-time airgunner, venturing into a completely different shooting sport is extremely exciting - but I've also been quite surprised at how 'hard' it's been. There's me thinking the switch from rifleman to shotgunner would be a fairly easy transition but, in fact, it's quite the opposite. Airgunning's a precision sport, whether you're shooting field targets at 50 metres or honing-in on a woody's bonce at 30. Shotgunning, on the other hand, is far less deliberate; far more of an instinctive thing.
I think I'm probably over-thinking everything when the Beretta's in my shoulder: head position, aim, yardage etc. etc. The bird I got on the wing yesterday evening was my first (having wasted a half-dozen cartridges on previous forays). It was the second of both barrels, the first load being aimed at another pigeon before I swung onto the bird which I eventually dropped. The funny thing is that I don't remember why (or how) I made this a telling shot. I guess, in the end, it was an 'instinctive' shot - and that's why the bird fell out of the sky!
Having to touch off the trigger whilst the barrels are still moving is going to be a very difficult thing to come to terms with. I reckon I've shot over a quarter-million airgun pellets in my life, each and every one of them whilst deliberately trying to keep the barrel as still as possible.
And what's my verdict re. airgun vs shotgun? Well, the jury's out. Okay, I might be able to take birds on the wing - but I don't half miss the precision-delivered shot that a high quality air rifle and 12x scope offers...
Posted by NIGEL ALLEN's Official Airgun Blog at 16:54 5 comments:

A very warm welcome to...

Get Nige's Airgun Blog (it's free!)

POLL: What is the best camouflage pattern for airgun hunting?

POLL: What is the most effective hunting method for airgunners?

My Blog's brought to you FREE, so if you enjoy its content, a donation would be gratefully received

We're all following Nige's Airgun Blog - are YOU?